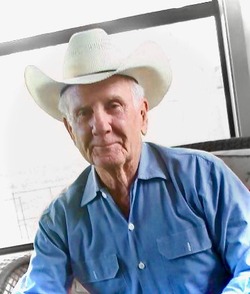 Allan James ‘Jay’ Hancock, 92, of Cibolo, Texas passed peacefully December 12, 2017. Born in Fort Cobb, OK to Walter and Ophelia Hancock, he lived most of his life in San Antonio & Cibolo.  Jay is preceded in death by his parents, Walter & Ophelia Hancock and sisters, Gladys & Myrtie Hancock.

In 1943, at the tender age of 18, he joined the U.S. Navy. At 19, he piloted a Higgins Landing Craft with Boat Pool Baker SLCU #36 delivering the allies to the beaches of Okinawa.  He was awarded the American Campaign Medal, Asiatic-Pacific Campaign, WWII Victory Medal, Navy Marksmanship Ribbon and Purple Heart on Okinawa.

Always a cowboy at heart, after Jay returned to his hometown of Graham, TX, he joined oilman Charles Edward Hipp’s 24 white horses rodeos and parades riding the grand entry and presenting the 6 flags of Texas. The next chapter of life brought him to San Antonio, where he went to work for and eventually owned City Appliance Sales & Service in Alamo Heights.  By reputation, the business grew and earned awards from Hot Point and Sub Zero for outstanding service.  In 1967, he joined the Masonic Lodge and February 1968, he advanced to become a Master of the Royal Secret of the 32 Degree of the Ancient and Accepted Scottish Rite in San Antonio.

I guess you’d say his favorite place in the world was in South Texas hunting whitetail deer or up in the mountains of Colorado on annual hunting trips with his buddies. An avid outdoorsman and animal lover, there was always a dog by his side.  He leaves behind his trusty companion, Gypsy, a rescue dog.  They were like peas and carrots.

Now Daddy took fashion cues from no one. His signature every day look was all his:  Wrangler jeans and western chambray shirt “with Pearl Snaps,” and western work boots paired with his favorite Navy baseball cap of the day.  Now don’t think he couldn’t clean up nicely.  There were always a couple of Stetsons and some Lucchese Boots in his closet for those special occasions.

In lieu of flowers, Daddy wants you to take that money, do what you love and make some memories.

To send flowers to the family in memory of Allan James "Jay" Hancock, please visit our flower store.