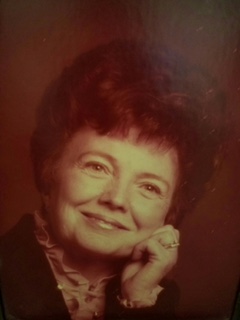 Alma Inez Grubbs Bramlet, a long time resident of Graham, Texas, was called home to be with her Lord and Savior on July 25th, 2017, at Graham Oaks Nursing Home.

Inez and Henry had four children, Anita Mae, David Lee, Charles Franklin, and James Doyne. They raised their children in the communities of Jean, Olney, and Houston. Mom was an amazing homemaker. She was best known for delicious tasting pies and scrumptious candy. As a young teenager, she kept the accounting books for her father, while he managed the grain elevator in Jean. She was known for having good math skills. Inez also worked as a seamstress at Haggar’s Clothing factory in Olney. When she moved to Houston she started her long career as a waitress. She was known for her warm smile, her welcoming personality, and superb service.

Inez was not only a mom to her four children, but also to many of her nieces, nephews, and to her childrenand grandchildren’s friends. She was “Mom” to everyone and “Grannie” to many more. When Inez had all her family together was when she was the happiest.

Inez was known to quiet a crying baby or to get them to sleep, better known as the “baby whisperer.” In Inez’s spare time she would read, garden, crochet, knit, and cross-stitch. She was a ray of sunlight that touched so many hearts with her kind and unselfish ways. Her sweet hellos, and her warm and welcoming hugs will be missed.

Oh, one more thing. Inez loved Dr. Pepper and kept Dr. Pepper in business. So, for all you Dr. Pepper fans mom is probably already getting them shipped to heaven.

Survivors include: daughter, Anita and husband Tom Ertle of Graham; sons, David Lee Bramlet of Olney, Charles and wife Nancy of Graham, and James and wife Mary of Cleburne; 12 grandchildren; and 22 great-grandchildren.

She was preceded in death by her parents, Charlie and Lena Grubbs; and her siblings Raymond, Sandy (Cecil), LeRoy, Nora Faye Davis, Charles, and Donald.

A memorial service will be held at 11 a.m. August 4, 2017, at the Morrison Funeral Home Chapel in Graham, officiated by Pastor Clifford Allen Sims of Dublin.

The family of Inez would like to thank the staff at Graham Oaks Nursing Home and Beyond Faith (Hospice) of Graham, that provided amazing love and care during the time she lived at the nursing home, as well as the compassion they demonstrated in her final days. Memorial donations are suggested to: Beyond Faith Hospice, Graham, Texas.

To send flowers to the family in memory of Alma Inez Grubbs Bramlet, please visit our flower store.
Send a Sympathy Card