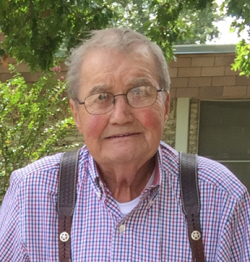 William "Bill" Golden, 78, went to be with his Lord and Savior Tuesday, September 27, 2016 in Graham. Funeral services will be held Friday, September 30, 2016 at 2:00 p.m. in Oak Street Baptist Church. Burial will follow in Pioneer Cemetery under the direction of Morrison Funeral Home.

Bill was born August 6, 1938 in Electra to the late Reeves Black and Etta Dell (Walkup) Golden. He graduated from Electra High School and married Marsha Brown August 23, 1957 in Electra. Bill owned and operated Golden's Radiator Shop for over 40 years in Graham and he was a member of Oak Street Baptist Church.

He was preceded in death by sister, Holley Bea Golden and brother, David Lee Golden.

Memorials may be made to the Young County Humane Society, Agape Ministries at Oak Street Baptist Church or Samaritans at First United Methodist Church.

To send flowers to the family in memory of Bill Golden, please visit our flower store.
Send a Sympathy Card