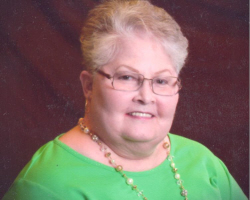 Caren Louise Essary, 70, passed away Sunday, October 1, 2017 in Weatherford.  She was born October 4, 1946 in Dallas to the late Bobby C. and Audrey (Linxwiler) Wiggins.  She married James Essary, January 27, 1975 in Mineral Wells.  He preceded her in death on September 20, 2011.  She was also preceded in death by her youngest brother, Steve Wiggins.

Funeral will be Friday, October 6, 2017 at 2:00 p.m. in First Baptist Church Graham.  There will be a visitation and time of fellowship at 1:00 p.m. at the church.  Burial will follow in Pioneer Cemetery.  Arrangements are under the direction of Morrison Funeral Home.

To send flowers to the family in memory of Caren Louise Essary, please visit our flower store.
Send a Sympathy Card