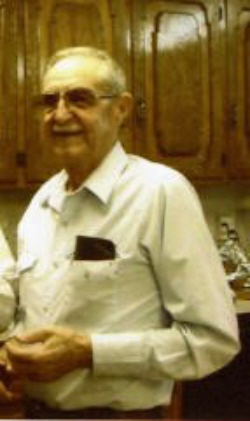 He was born on June 30, 1922 in Eliasville, Texas to Charles Edgar Delong, Sr. and Mae Casey Delong. Curly is preceded in death by his first wife of 42 years, Rudell Ramsey DeLong, and all four of his siblings: three brothers; Clyde, Faye, and Lessie, and sister; Dorothy.

Curly was a Christian man, first, whom God blessed with an incredibly full life. Being a humble man, Curly enjoyed the simple things in life. There was not anything he wouldn’t do for those very dear to him because of his loving, loyal, and dedicated nature. He believed in being active in his community; he proudly served in The United States Army Corps of Engineers and as a deacon of the Morningside Baptist Church, Sunday school teacher, and Graham Independent School District board member. Even though Curly’s career in the oil & gas industry spanned many years, he enjoyed putting some of his many skills and abilities to good use, such as being a barber, to dowsing water wells, to working at Graham Roofing, just to name a few. Although Curly retired at the age of 93, he was not the type of person to “just sit around.” He always had something to tend to whether it was gardening, repairing/remodeling something, or feeding the birds; the amount of energy God blessed him with was amazing. Curly relished Betty’s home-cooked meals and homemade desserts. He felt very blessed about being an uncle to great, great uncle to his DeLong Family nieces and nephews. He also enjoyed sharing stories about his family’s historical heritage and how Eliasville, Texas is named after his great grandfather, Elias DeLong. Curly’s face would “light up” when he’d recall stories of his youth especially when he and his best friend, Vernon Hazelton, designed and constructed a boat and a time when he panned for gold in Colorado. Curly traveled with The Graham Cracker Travel Trailer Club and delighted in traveling and sightseeing throughout the United States on camping trips. He enjoyed fishing, hunting, playing dominoes, his marble board game, listening to Bluegrass music and Merle Haggard, too but most of all, reading. He was an avid reader his entire life up to his last days; a reader ‘til the end! Curly was a devout Christian and member of Morningside Baptist Church in Graham, Texas. Curly was a loving husband, father, grandfather, uncle, and friend who was loved by many and will be greatly missed.

To send flowers to the family in memory of Charles Edgar "Curly" Delong, Jr., please visit our flower store.
Send a Sympathy Card