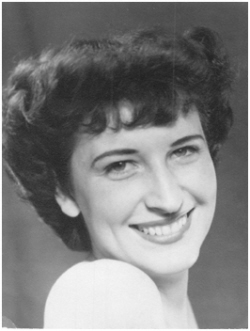 Fort Worth – CHLOE DELL STALCUP KING, 92, passed away peacefully on December 11, 2016 in Fort Worth surrounded by family and friends.

A celebration of her life will be held at First Baptist Church, Graham, Texas, at 11:00 a.m. on Saturday, December 17, 2016.  Burial at Pioneer Cemetery will be prior to the memorial service.  Arrangements are under the direction of Morrison Funeral Home.

Chloe was born in Goree, Knox County, Texas on April 29, 1924 to Ira Lyman Stalcup and Delta Edwards Stalcup in the home of her maternal grandparents, Mr. & Mrs. Houston Jeptha Edwards. She attended public schools in Goree and graduated from Goree High School in 1941.  The first o f her family to attend college, she attended North Texas State Teachers College in Denton, Texas, graduating in 1944 with a Bachelor of Science degree in Elementary Education and a minor in Art.  She was a member of the Phoreff sorority, which later became Alpha Delta Phi.  After a brief stint as head teacher in a pre-school program in Houston, she moved to Graham, Texas where she taught third grade for two and one-half years, including one year after marrying.  She later taught as a substitute teacher on occasion.  Prior to her marriage, she resided in the teacher’s dormitory.

Chloe met Beverly W. King, Jr. shortly after his return from Navy service in the South Pacific during World War Two and they were married January 27, 1946 at the First Baptist Church, Graham, Texas.  Because of the difficulty of obtaining a dress suit so soon after the war, Beverly had his Navy dress uniform “converted” to a dress suit for the ceremony.

Chloe partnered with her husband Beverly in expanding the family’s ranching operations, as well as being a hostess for many bank and chamber of commerce-related events over their 41 years of marriage.  Beverly and Chloe had four children, Kelly, Steve, Nancy and Carter.  Chloe and Beverly were also enthusiastic travelers, going together on numerous pleasurable trips.  She always took special care in selecting ‘treasures’ to bring back to grandchildren and great grandchildren.

Like many of her generation, Chloe worked hard to improve and enrich her community.  She served as President of the Graham Garden Club, the Chautauqua Literary and Scientific Club, the Graham Hospital Auxiliary.  She was a charter member of Graham Woman's Club and was a regular book reviewer there.

Chloe was passionately interested in her heritage and performed genealogical research for decades, conducting wide-ranging correspondence long before computers and printers.  She was an active member of the Magna Carta Dames, Descendants of the Knights of the Order of the Garter, Colonial Dames of the Seventeenth Century, Daughters of the American Revolution, First Families of Tennessee and the History Club of the Women’s Club of Fort Worth.

Active in the First Baptist Church, she served as both a Sunday School teacher and department director in several Sunday School departments, as well as singing in the sanctuary choir.  When she later married a retired Methodist minister, they both attended services at the Baptist church and the Methodist church each Sunday.  Chloe also taught in the Sunday School at the First Methodist Church.

Following Beverly’s death Chloe met and married George Edward Bishop, Jr. on June 3, 1989.  They divided their time between Graham and Haltom City for five years until George’s death in 1994.  Chloe married Rev. James W. “Jay” Darnell on January 11, 2003 and resided with him in Graham until Jay’s passing in 2012.

The family suggest a memorial to the charity of your choice.

To send flowers to the family in memory of Chloe King, please visit our flower store.
Send a Sympathy Card