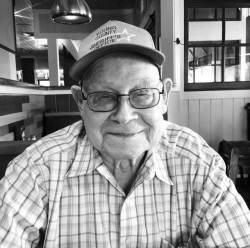 Clifford Junior Pruitt, 88, of Graham, went to join his beloved wife and our Lord Tuesday, January 17, 2017 in Graham. Funeral will be held Friday, January 20, 2017 at 2:00 p.m. at Faith Center. Burial will follow in South Prairie Cemetery under the direction of Morrison Funeral Home.

Cliff was an awesome Dad, Grandpa, PapPap, Pops and man. He will be dearly missed by his family and many friends. He has touched many lives with his infectious smile and his kindness to all.

Cliff was born April 12, 1928 in Hazelgreen, MO to the late Clifford Claud and Imo Fairie (Carroll) Pruitt. He served proudly in the US Navy in WWII and the Korean War as a UDT. He married his beautiful wife, Francis on February 9, 1945. He worked for Matador/Rock Island/Koch Oil and in his retirement for Wal-Mart as a door greeter.

Special thank you to all the Nurses at Garden Terrace Nursing Home, Solaris Hospice, and Brookdale Assisted Living Center.

To send flowers to the family in memory of Clifford Junior Pruitt, please visit our flower store.