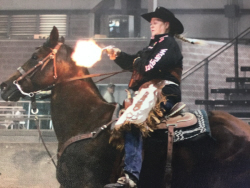 Connie was born January 18, 1944 in Burkburnett to the late Delmus and Pauline Womack.  She married Rowdy York June 23, 2008 in Graham.  She was a Vet Tech and loved horses.

Survivors include; husband, Rowdy York of Graham and daughter, Jodi York of Dallas.

She was preceded in death by a son, Jimmy Edwards.

To send flowers to the family in memory of Connie Lee York, please visit our flower store.
Send a Sympathy Card