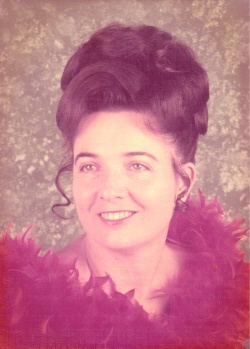 Cordie Pauline Hamlin Truitt, 83, passed away Wednesday, April 26, 2017 in Graham.  Graveside services will be held Sunday, April 30, 2017 at 4:00 p.m. in Jayton Cemetery in Jayton.  Arrangements are under the direction of Morrison Funeral Home.

Cordie was born March 31, 1934 in Jayton to the late John Henry and Edna Pearl (Flemming) Hamlin.  She married Curtis Gravlee in 1951 in Clovis, New Mexico and he preceded her in death.  She married Phillip Truitt in Aztec, New Mexico in 1973 and he preceded her in death.  Cordie was a rancher and a member of Rainbow Girl and a lifetime member of the VFW Auxiliary.

She was preceded in death by a son, Cal Shoat Gravlee, sister, Nell Aukes and brothers, George, Carliss and Clint Hamlin.

Visitation will be held Saturday from 4 to 6 p.m. at the funeral home.

To send flowers to the family in memory of Cordie Pauline Hamlin Truitt, please visit our flower store.