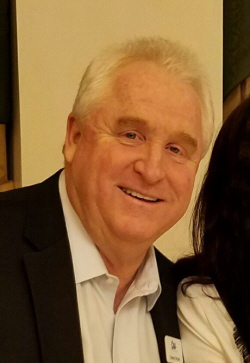 Dennis Gene Bryan, 61, passed away Sunday, March 26, 2017 in Dallas. Memorial services will be held Saturday, April 1, 2017 at 1:00 p.m. in First Baptist Church in Graham under the direction of Morrison Funeral Home.

Denny was born September 16, 1955 to the late Dr. John Manly and Joanne Lotz Bryan in Washington D.C. The Bryan family moved to Canyon, TX in 1956 where Denny graduated Canyon High School and continued his education by graduating from West Texas A&M University. Denny was the principle agent and owner of Bryan Insurance Agency for over 35 years.

Denny was an active member of the First Baptist Church in Graham where he sang of his love for the Lord in the choir and the men’s group New Ground. He was involved in the FBC Building program and his favorite time of year was participating in The Living Christmas Tree, put on by the FBC. Denny was a member of the Graham Rotary Club, Combined Agents of America, and he worked with Boley Featherstone Agency of Wichita Falls to develop the North Texas Oil and Gas Association Insurance Program which is now The Texas Alliance of Energy Producers. Denny was also on the board of the Graham Economic Development Corporation. Denny loved spending time at his home on Possum Kingdom Lake surrounded by family and friends, showing them age was nothing but a number when it came to a 50 ft. slip n’ slide, he was the king. Denny Bryan was a one of a kind man who showed everyone he met compassion and generosity.

To send flowers to the family in memory of Denny Bryan, please visit our flower store.
Send a Sympathy Card