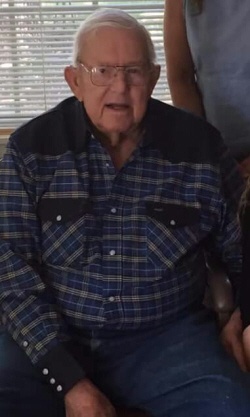 Don was born October 29, 1934 in Young County to the late Johnnie Franklin and Lena Mae  Frazier Jobe.  He married Patricia Lee Walker, January 15, 1955 in Graham.  She preceded him in death on June 30, 2015.  Don was a lifetime resident of Young County and a member of Medlan Chapel Primitive Baptist Church.  He was self employed in the Oil and Gas business for over 40 years.

Don was preceded in death by a son-in-law, Mike Doss and a granddaughter, Darcey Renee Jobe.

Family visitation will held Monday from 6 to 8 p.m. at the funeral home.

To send flowers to the family in memory of Donald Gene Jobe, please visit our flower store.
Send a Sympathy Card