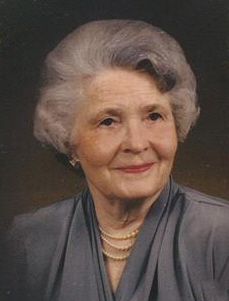 Elizabeth "Betty" Wells French, passed away peacefully January 11, 2019, at the Elaine Center in Hadley, Massachusetts. Born in 1922 and reared in Proffitt, Texas, Betty was the daughter of Bob and Fay (Gilmore) Wells. She graduated from Texas Woman's University in Denton  and later married and raised a family in Springfield, Tennessee. In addition to a career as a social worker, she was a devoted mother and grandmother, and a member of the Presbyterian Church in Springfield, Tennessee. She loved her dogs, her bridge friends, and gardening. She was an avid reader of biography and fiction.

She is survived by her daughter and son-in-law, Elizabeth and Jack Finn (Amherst, Massachusetts); her son, Jefferson M. French III (Newcastle, Texas); grandchildren and their spouses, Katie, Robert, Clare, Ned, and Phil; great-grandchildren, Chili, Zachary, and Lindsay. Her survivors include beloved cousins in the Wells family. Dear to her heart also was Joseph "Sonny" Long (Springfield, Tennessee).

She leaves many loving and loyal friends in Tennessee, including Wanda Smothers, June Haley, Libby Nichols, and others.

A celebration of her life will be held at Grace Episcopal Church, Amherst, Massachusetts, at a time to be announced. Interment will be Saturday, March 16, 2019 at 11:00 a.m. in Proffitt Cemetery.

To send flowers to the family in memory of Elizabeth Betty Wells French, please visit our flower store.
Send a Sympathy Card