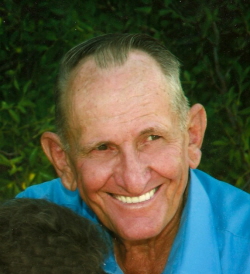 Great is Thy faithfulness Lord unto me.

On Friday, April 7, 2017, Christ welcomed Ernest W. Harrell into his eternal home. Ernest was an amazing husband, daddy, papa, and friend. But most of all he was a faithful servant for God’s kingdom.

His life began July 21, 1934, in Coleman County to the late Raymond and Oleta Harrell. Then in 1952 he met the love of his life, Oleta Harris, who became his bride for 64 years. Their journey through life brought them to Graham in 1960. He was employed by TU Electric until his retirement in 1992. Prior to his retirement, he began farming and ranching in Young County. He also consulted for FluorGlobal for 20 years after retirement. Together, Ernest and Oleta raised three children Jeanetta, Charles, and Trish.

Funeral services will be held Sunday, April 9, 2017 at 2:00 p.m. in the First Baptist Church. Burial will follow in Pioneer Cemetery under the direction of Morrison Funeral Home.

Visitation will be held Saturday from 6 to 8 p.m. at the funeral home.

To send flowers to the family in memory of Ernest Wayne Harrell, please visit our flower store.
Send a Sympathy Card