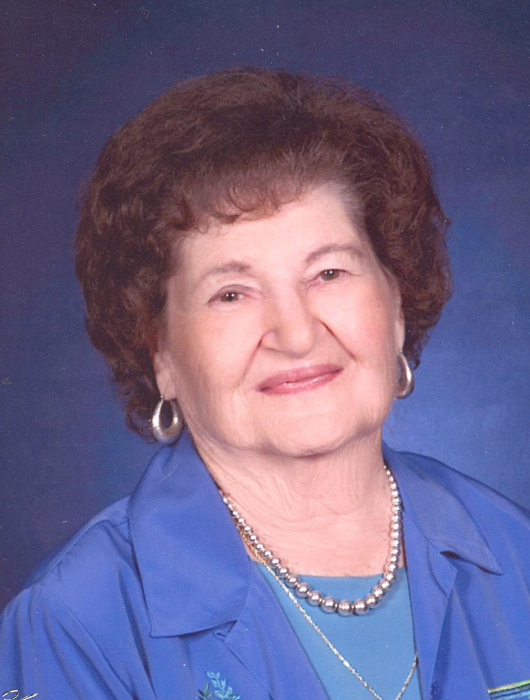 Geraldine "Gerry" Laura Moody, 94, passed away Tuesday, June 19, 2018 in Graham.  Graveside service will be held Friday, June 22, 2018 at 10:30 a.m. in Oak Grove Cemetery followed by a memorial service at 11:00 a.m. in the First United Methodist Church.  Arrangements are under the direction of Morrison Funeral Home.

Gerry was born May 10, 1924 in Harrison County to Felton and Annie (Riley) Morris.  She grew up in the Piney Woods of East Texas playing basketball and was a Gold Star Girl in 4H.  Gerry later admitted that she would have never won it if her mom hadn't helped her.

She graduated from the Lily Jolly School of Nursing and was a RN.  She specialized as a surgery nurse and while working at the Veteran's Hospital in McKinney she met J I Moody, Jr.  They married on July 31, 1954 and began a family.  They had four children James I Moody, III "Petey", Missy Moody both of Graham, Becky Moody Phillips of Odessa, and Morris "Bubba" Moody of Broussard, LA.

Gerry was a member of the First United Methodist Church in Graham and loved her Sunday School Class, the High Questors.  She became an Aggie when she married J I and traveled with lifelong Aggie classmates and friends.

She loved to read and you could find her most evenings watching Jeopardy and occasionally enjoying a piece of pecan pie (her favorite).  She also loved horse racing.  Just recently she picked the Triple Crown winner, Justify!

She was preceded in death by her husband JI Moody, Jr, parents Felton and Annie Morris, grandson, James I Moody, IV and three sisters.

Special thanks to her glam squad: Maria Valentin, Heather Lindley, and Angela Youngblood.

The family would like to thank Beyond Faith Health Care and Hospice for their invaluable care and assistance.

Memorials may be made to the Young County Humane Society or a charity of your choice.

To send flowers to the family in memory of Geraldine "Gerry" Morris Moody, please visit our flower store.
Send a Sympathy Card