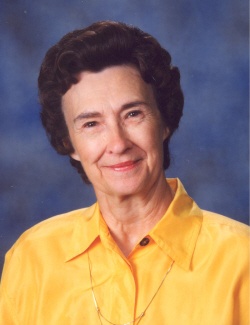 Gwendola "Gwen" Lamb Reynolds has left this world to join her Lord. From her birth in Flint Michigan on Oct. 15, 1930, to her peaceful death in Weatherford Texas on April 26, 2017 she has served her family, her church, and worked in the computer lab at Crestview Elementary for 15 years.  Gwen lived most of her life in Graham and was a member of the First Baptist Church.

Gwen is survived by her sister, Leola Wingfield of Arkadelphia, Arkansas; her daughter, Banae Reynolds of Weatherford, Texas, and her daughter and son-in-law, Rhonda and Dave Douglas of Houston, Texas.

Gwen was preceded in death by her husband, Bobby Reynolds, her infant daughter Donnice Reynolds, her parents, Tommy and Muriel Lamb, her sister, Barbara Hunter.

The family would like to thank the staff at Martin Crest Memory unit in Weatherford for their love and care for our mom in the past few years.

In lieu of flowers, contributions can be sent to Alzheimer's Association or the First Baptist Church.

To send flowers to the family in memory of Gwendola "Gwen" Lamb Reynolds, please visit our flower store.