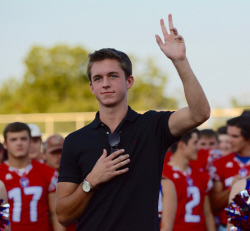 Harrison Irwin Brown passed away on May 1st, 2017 in Austin, Texas on the campus of The University of Texas.  He was 19.

A memorial service will be held on Saturday, May 6th at 1:00 pm at the Graham High School Basketball Gym officiated by the Rev. Msgr. Raymund Mullan of Mansfield, formerly of Graham and assisted by the Rev. Eugene Nyong of St. Mary’s Catholic Church in Graham.

Born on September 17th, 1997 in Wichita Falls, Texas to Kurt and Lori Brown, he who for a little more than nineteen years lived and labored among us is gone.  The hand that had handed out so much to others is stilled; and the voice that meant hope and encouragement to so many is hushed.

God in His infinite wisdom has seen fit to remove the walks of men this noble and gentle soul, but the works of Harrison Brown will live on for many generations yet to come.

Harrison is survived by his parents Kurt and Lori Brown of Graham, by his brother John Brown and sister-in-law Allie, of San Antonio and by his beloved nephew and Godson, William Kurt Brown.

He is also survived by his grandparents Diane Brown of San Antonio, Dick and Deanna Irwin of Greer, South Carolina, formerly of New Braunfels and by many uncles, aunts and cousins and many friends across the globe.

Harrison was preceded in death by his grandfather, William D. Brown, by his great-grandparents Lillie Brown, Peter and Anna D’arcangelis and by his cousin, Michael Brown.

To send flowers to the family in memory of Harrison Irwin Brown, please visit our flower store.