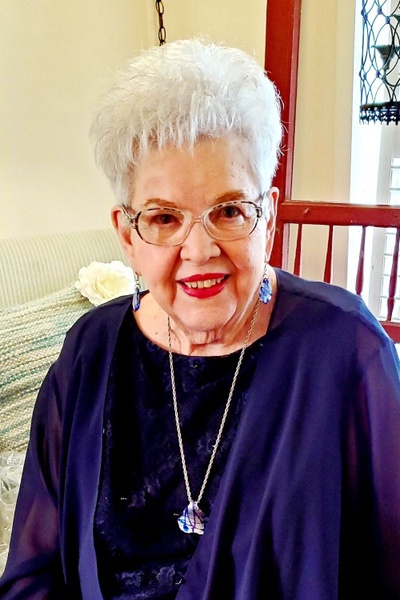 Helen Frances Hawkins, 88, passed away peacefully on February 26, 2022, in Graham, Texas, surrounded by family.  A celebration of her life will be held at First United Methodist Church of Graham at 11:00 am on Wednesday, March 2. Interment will be at 9:30 am at Hawkins Chapel Cemetery under the direction of Morrison Funeral Home of Graham. Family visitation will be Tuesday, March 1, from 6 to 7 pm at Morrison Funeral Home.

Helen Frances Hawkins was born in Fort Worth, Texas, on March 8, 1933, to the late Howard Nelson Speer and Mary Evelyn Short Speer. She attended Fort Worth public schools and graduated from Carter Riverside High School, where she played flute in the band in addition to her private studies in piano.  She started her long professional music career as a sophomore in high school, playing organ for Riverside Methodist Church.  Helen graduated from Texas Wesleyan College in Fort Worth in 1954 with a Bachelor of Music Education degree in flute and piano and later earned a Master of Music Education degree from Midwestern University.  She also attended Perkins School of Theology at Southern Methodist University in Dallas, earning certification from the Central Texas Conference of the United Methodist Church as a Music Assistant in 1984 and an Associate in Music Ministry in 1985.

Helen married the love of her life, Lindsey B Hawkins of Loving, Texas, on July 10, 1954, at Riverside Methodist Church in Fort Worth. They began their life together in Seymour and then moved to the family dairy farm, Hawkins Dairy, established near Loving in 1948 by Lindsey’s parents, Mr. and Mrs. Sam Hawkins. For many years Helen and Lindsey helped run the dairy and raised cattle, eventually starting their family and raising their two sons next door to their grandparents, Sam and Avis.  Helen began to teach private piano and voice lessons out of her home in the early 1950s and was hired to be the organist at First United Methodist Church in Graham in 1955, having previously served as organist at First Methodist Church in Seymour. She served in the music ministries at FUMC as the organist and pianist for forty-five years and became a faithful member of the adult choir upon her retirement as organist in 2000.  Following her retirement, she continued to play for chapel evening services at FUMC and for occasional weddings and funerals. She was very active as well in her beloved Sunday School class, the Circuit Riders, and in the United Methodist Women.

After Lindsey passed away in 1977, Helen moved to Graham, where she continued to teach private voice, piano, and organ lessons to countless numbers of students from all over Young County for a total of sixty-six years during her life.  In the late 1980s she became the very first elementary music specialist for the Graham ISD.  She taught general music, including Orff and Kodaly, to K – 6 students at Crestview, Pioneer, and Woodland Elementary Schools, traveling from school to school with her music and instruments in tow.

Helen’s lifelong work as a church musician, private lesson teacher, and a school music specialist brought the joy of music to literally thousands of young children, youth, and adults. The Helen F. Hawkins Scholarship Fund was established at FUMC for Graham High School graduates, and Helen was very pleased to announce the scholarship winners herself for several years.

Helen loved her family above all else. Her life was spent juggling the dairy, the church, the schools, and private lessons, but family always came first. She was known for her dedication, her work ethic, her perseverance, her caring spirit, and her steadfast faith.  She will be laid to rest beside Lindsey at historic Hawkins Chapel Cemetery, where the original Hawkins family Methodist circuit-riding preachers founded their church in the 1800s and generations of family are buried. Her motto was always: “Keep a song in your heart.” And indeed she did…for a lifetime.

To send flowers to the family in memory of Helen Frances Hawkins, please visit our flower store.