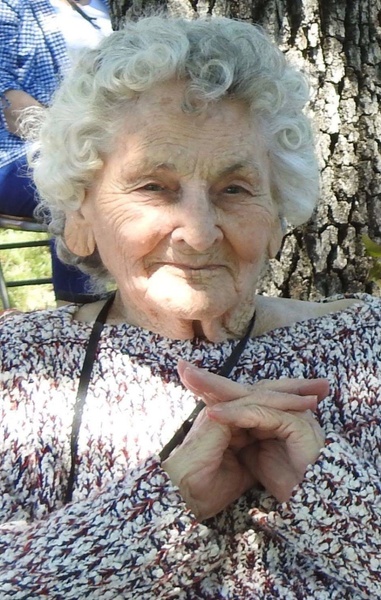 Heaven gained a beautiful angel this week with the passing of Imagene Bristow (Carson, Moore, Sweeney). She peacefully passed away at the age of 95 Wednesday, June 2, 2021 in Graham, Texas. There will be a public visitation at Morrison Funeral Home Friday, June 4th 6-8 pm and a funeral service will be held at St. Mary's Catholic Church on Saturday, June 5, 2021 at 10:00 am. Burial will follow at Pioneer Cemetery.

Imagene was born on July 4, 1925 in Seymour, Texas to the late Eugene Angue Sweeney and Eva Lavania Roberts. She was the youngest of 7 brothers and sisters born, 1907-1925. They were always a close family, living with each other, raising their children together, and yearly family gatherings for more than 60 years and counting.

On June 19, 1944 she married the love of her life, James W. Bristow. When Jim and Imagene met, he was serving in the Army Air Corps and Imagene was a beauty operator in Ft. Worth. When he asked her to marry him, Imagene agreed right away but, being in the service, he had to go on a trip. He told her that he would write every day. She went home to Graham to get ready, but she didn’t get one letter the entire time he was gone and decided not to marry him if he didn’t care anything more than that. When he returned, she found out that her (loving) older brother was intercepting the mail and throwing it away because he didn’t want his little sister to marry “that dammed soldier.” She never got any of the letters but, obviously, agreed to marry Jim right away. She said he always made her feel important and that the work she did at home was valuable. He said that he could not work if she wasn’t at home running the household and she loved the work she did. They were married for 38 years before he preceded her in death on December 11, 1982. Together they welcomed their sons, Bob, John and Steve. They raised their kids together in Irving, Houston and Graham, always coming back to Graham to be close to the family they loved.

Imagene's beauty is passed on to her children and grandchildren and great-grandchildren and more because of the dedication and the love she always showed to every person kind enough to give her a hug and a kiss. It was her mission in life to take care and love people, and she did it her best every day.

To send flowers to the family in memory of Imagene Bristow, please visit our flower store.