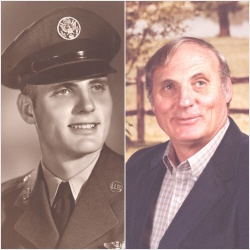 James F. "Jim" George, 85, of Wichita Falls, passed away Sunday, December 4, 2016 in Wichita Falls. Funeral services will be held Friday, December 9, 2016 at 11:00 a.m. at First Presbyterian Church in Graham with Tom Wisdom officiating. Burial will follow in Pioneer Cemetery under the direction of Morrison Funeral Home.

Jim was born in Graham on March 4, 1931 to Vernon and Ethel York George. He grew up in Graham, attending and graduating high school there in 1949. He served with the Strategic Air Command, 15th Air Force, 22nd, 92nd & 93rd Bomb Wings during the Korean War. He founded J & M Oil Field Service & Equipment in 1971. He was active in that business until his death. He was a Presbyterian and member of ELKS Lodge #1105. He served at his church as Deacon and Elder. He married Ethel Lewis on July 19, 1980.

The family would like to express a special thank you to the nurses and doctors at United Regional Health Care Center and Hospice of Wichita Falls.

Visitation will be held Thursday from 5 to 7 p.m. at Morrison Funeral Home.

To send flowers to the family in memory of James F. "Jim" George, please visit our flower store.
Send a Sympathy Card