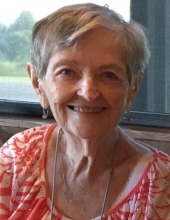 On Wednesday, April 29, 2020, at the age of 92, Heaven gained an angel, Joan Swaney. God better be ready though, because as sweet as she was, she also had a sassy, feisty side that we all loved.

Aunt Jo, as she was known to many, was born on June 29, 1927 in Graham, Texas to Ernest and Willah Falkinburg. Joan found herself living in San Diego, California in the mid 1940’s and doing civil service work for the Navy as a secretary in the supply department. From there she went to Ponca City, Oklahoma where she began working as a secretary to the operating manager at Oklahoma Natural Gas in the early 1950’s. She remained there until her retirement nearly forty years later. Joan lived the rest of her life in her beloved Ponca City.

This wonderful lady loved to travel and always had her bags packed. Music was also a very important part of her life. Anyone who knew Joan, also knew that she always said what she meant, and meant what she said and you had better listen!

She was an active member of St. Paul's United Methodist Church for over forty years, being involved with Love Quilts, Choir, and the United Methodist Women. She was an advocate for the visually impaired through her involvement in the Vision Support Group of the Lion’s Club of Ponca City and a member of the ESA sorority. She dedicated her life to helping others and she truly had a heart of pure gold.

She was preceded in death by her loving brothers, Edward Falkinburg, Robert Falkinburg, her sister, Adah Grace McCoy, and her nephew, Bill Falkinburg.

A memorial graveside ceremony will be held Saturday, June 6, 2020 at 11:30 a.m. in Oak Grove Cemetery in Graham, TX under the direction of Morrison Funeral Home. Arrangements were handled by Trout Funeral Home & Crematory of Ponca City, OK. Donations may be made in Joan’s memory to Love Quilts of St. Paul’s UMC, 1904 N. Pecan, Ponca City, OK 74601 or Hospice of Northern Oklahoma, 445 Fairview Ave., Ponca City, OK 74601.

To send flowers to the family in memory of Joan Swaney, please visit our flower store.
Send a Sympathy Card