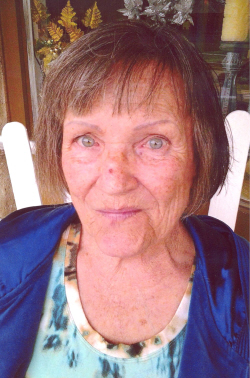 JoAnn Young, 75, passed away Sunday, September 17, 2017 in Denton.  Graveside services will be held Wednesday, September 20, 2017 at 12:00 p.m. in Eliasville Cemetery under the direction of Morrison Funeral Home.

JoAnn was born November 25, 1941 in Okmulgee, Oklahoma to the late Jessie and Alice (Jones) Smith.  She married James Young and he preceded her in death in 2000.  JoAnn was a caregiver.

Survivors include: daughters, Tammie Lipham and Bart King of Denton, Debbie Mulberry and Rick of Weatherford, and Sherry McBrayer and Randy of Boyd; sons, Joe Green and Tammy of Bridgeport and Chris Green and Stephanie of Graham; sisters, Nita Lipton of Corinth and Bobbie Smith of Dallas; several grandchildren.

She was preceded in death by 3 brothers and a sister.

To send flowers to the family in memory of JoAnn Young, please visit our flower store.