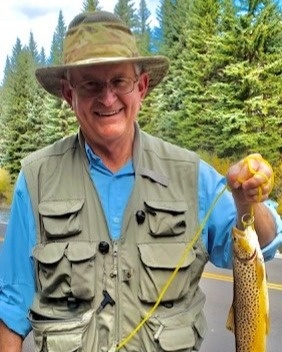 Lonny was born on October 22nd, 1959 in Graham to the late Lindsey B and Helen Frances (Speer) Hawkins. He graduated from Graham High School in 1978 and went on to attend Texas Wesleyan University, then Midwestern State University where he graduated with a Bachelor of Business Administration degree in 1983. He played trombone in the Big Blue Band and was in the Jazz band at Texas Wesleyan. He married Joan Beisch in Graham on January 3rd, 1981, and together they had two daughters, Candace and Allie.

Lonny was the pastor of Antelope United Methodist Church and was very close to the members of his Sunday school class. They would have breakfast before starting the class, discuss current events, study the Bible and enjoy being in each other’s company. Often the class would close with a joke from resident author Sue Wells, followed by resounding laughter that started the service off in a bright and cheerful way. Lonny was also the Lead Regulatory at White Knight Productions and did regulatory/accounting work at T & R Operating.

He was an excellent fisherman. On his most recent vacation to Colorado with his family, Lonny caught a 16-inch Brown trout in swift water with the bottom half of a pole after losing the top half to another fish. In his words (about the fishing pole), “I like it better this way anyway.” His patience was what made him not only a great fisherman, but an amazing father, pastor and leader. He loved to ski in his younger years, and taught his whole family how, and how to do it well. He and Joan would ski down the mountain with a toddler between their legs while holding their poles across them. There were many happy memories made, and many of them in the mountains during all seasons of the year.

Lonny could make everyone around him laugh, smile and feel like they were family. He had a profound love for his Lord and Savior, Jesus Christ. He could so eloquently convey the word of God to his community in ways that would move many to tears, it was a gift that will live on in the lives of those he touched.

Memorials may be made to the Helen Hawkins Scholarship Fund at First United Methodist Church, 700 Third Street, Graham, Texas 76450

To send flowers to the family in memory of Lonny B Hawkins, please visit our flower store.