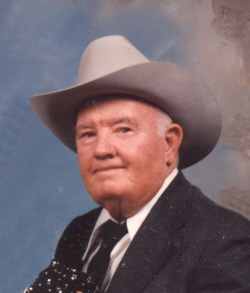 Louis was born, August 14, 1920 in Jack County, Texas to the late William Bryan and Iva Viola (Thetford) Farmer. He was a Veteran of the Army serving during World War II. Louis married Rosa Lee Wood, August 9, 1941 in Jacksboro. She preceded him in death on January 12, 2013. Louis moved to Graham in 1946 where he worked in the oilfield and concrete worker.

Visitation will be held Sunday from 5 to 7 p.m. at the funeral home.

To send flowers to the family in memory of Louis Thurman Farmer, please visit our flower store.
Send a Sympathy Card