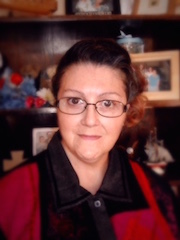 Lychelle Marie Doolittle, 49, passed away peacefully on Wednesday, May 10, 2017.  A Memorial service will be held Saturday May 13, 2017 at 2:00 p.m. at True Life Church in Graham.  Arrangements are under the direction of Morrison Funeral Home.

Lychelle was born June 23, 1967 in Dallas, Texas.  She married Robert Doolittle on August 31, 2012 in Modesto, CA.  She was a Homemaker and a member of First Apostolic Tabernacle in Sweetwater, TX.

To send flowers to the family in memory of Lychelle Marie Doolittle, please visit our flower store.
Send a Sympathy Card