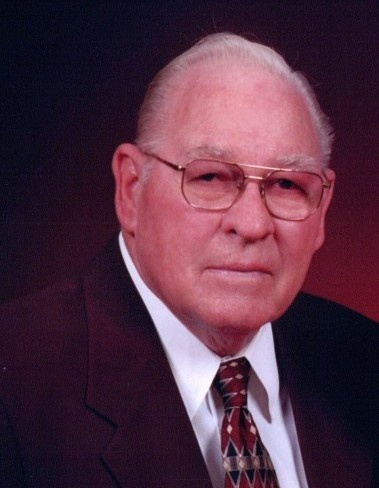 Malcolm Rex Henderson, Sr., 96, died peacefully at home Sunday, August 29, 2021. Funeral will be 10:30 a.m. Thursday, September 2, 2021 at the gazebo in Pioneer Cemetery. Arrangements are under the direction of Morrison Funeral Home.

Rex was born October 22, 1924 in Bryson, Texas to the late Pearl (Tudor) Henderson and Samuel Arthur Henderson. He married Mary Ella Braddock, April 16, 1949 in Wichita Falls. She preceded him in death on December 14, 2010. Rex served in U.S. Army during WW II and was one of seven 18-years-old drafted from Bryson, Texas. He was stationed in Fort Polk and served overseas in Hawaii and Okinawa. Rex was owner and operator of Amsco Casing Pulling along with Harrell Braddock and his sons for many years in Graham.

Rex was preceded in death by four sisters and three brothers.

Special thanks to Kindred at Home and Solaris Hospice for their loving care.

In lieu of flowers memorials may be made to Graham Senior Citizens Center, First United Methodist Church or charity of your choice.

To send flowers to the family in memory of Malcolm Rex Henderson, please visit our flower store.
Send a Sympathy Card