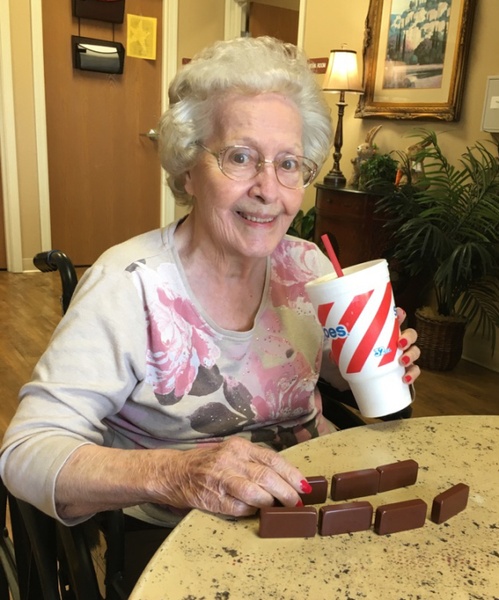 Mary Ellen Robertson of College Station, Texas passed away Friday, June 21, 2019 at the age of 95.  Graveside service will be 10:30 a.m. Saturday June 29, 2019, at Pioneer Cemetery in Graham, Texas, officiated by Bill Wiman and David Clark.  Arrangements are under the direction of Morrison Funeral Home, Graham.

Mary was born, February 13, 1924 in Hyman, Texas to Frank and Myrtle Andrews.  After graduation from Westbrook HS in 1942, Mary married Thomas Brooks Robertson on April 14, 1943 in Fort Worth, Texas.

Mary got her Cosmetology license in Abilene, Texas in 1956 and worked at several Beauty Salons until the family moved to Sweetwater, Texas in 1959.  There she worked at Sula's Beauty Shop for many years.  In 1967 her husband entered the Ministry where they served at Sardis Baptist Church in Fisher County.  In 1971 they moved from Sweetwater where they ministered and served together at several Baptist churches in Texas including Breckenridge, Red Springs, Munday, Azle, and lastly at Loving, Texas.  After her husband retired they moved to Graham, Texas where Mary opened up Mary's Magic Mirror beauty salon and worked there until 2001 when she moved to Bryan, Texas to be close to family and was a member of First Baptist Church, Bryan.

"But I would not have you to be ignorant, brethren, concerning them which are asleep, that ye sorrow not, even as others which have no hope.  For if we believe that Jesus died and rose again, even so them also which sleep in Jesus will God bring with him." (1Thessalonians 4:13-14 KJV)

To send flowers to the family in memory of Mary Ellen Robertson, please visit our flower store.