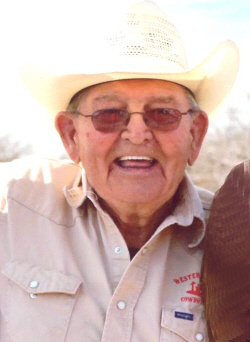 Oran B. "B-BOY" Chestnut, 81 of Graham, passed away Monday, November 28, 2016 at his home. A graveside funeral will be held Wednesday, November 30, 2016 at 3:00 p.m. at Finis Cemetery in Jack County. Arrangements are under the direction of Morrison Funeral Home.

Oran was born December 11, 1934 in Clayton, Oklahoma to the late Lee and Emma Mildred (Roquemore) Chestnut. He married Dorothy Fowler on December 31, 1980 in Graham . Oran was retired from Young County Precinct # 1 as a foreman. He was a member of Country Road Fellowship..

Visitation will be Tuesday 6 until 8 p.m. at Morrison Funeral Home.

To send flowers to the family in memory of Oran B. Chestnut, please visit our flower store.
Send a Sympathy Card