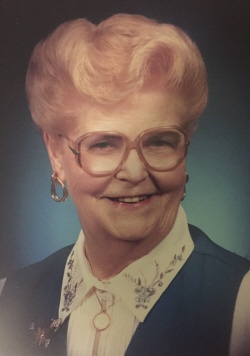 Purnie Ovella Weatherbee, age 95 of Graham, left her earthly home on Sunday, April 30, 2017. Ovella was born on March 17, 1922, in the Montague Community near Bowie, Texas to parents John Franklin Hill and Eva Jane Sanders. She and her seventeen siblings grew up on their family farm in Hedley, Texas where she attended the local school.

Ovella met Marvin Jean Weatherbee in Clarendon and following their courtship they were married on December 15, 1940, in Childress. They made their home in Olney where Ovella worked after Marvin completed his service in the United States Army. During that time Marvin and Ovella welcomed their firstborn son, Homer Jean Weatherbee, to their family. Thereafter they welcomed two more sons, Jerry Don Weatherbee and Terry Lynn Weatherbee, before moving to Graham. Ovella was the consummate homemaker and was always involved in the extracurricular activities of her sons.

Ovella loved life and always lived to the fullest. She was active in the Graham community and enjoyed the local Senior Citizen dances. Also, she was a member of the First United Methodist Church and, in recent years, she always looked forward to in-home visits from the Good Samaritans of the church.

The last surviving sibling, Ovella was preceded in death by nine brothers and eight sisters as well as her husband Marvin, in January of 1975, and loving son, Homer, in December of 2015.

A celebration of her life will be held Thursday, May 4, 2017 at 10:00 a.m. in the First United Methodist Church. Interment will follow in Pioneer Cemetery under the direction of Morrison Funeral Home.

Visitation will be held on Wednesday evening from 6 to 7 p.m.

To send flowers to the family in memory of Purnie Ovella Weatherbee, please visit our flower store.
Send a Sympathy Card