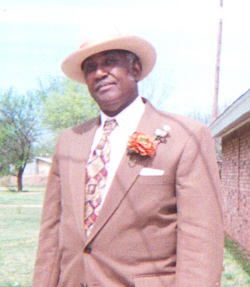 Reverend Dave Autry, Jr., 91, passed away Sunday, October 16, 2016 in Graham.  Funeral services will be held Saturday, October 22, 2016 at 11:00 a.m. in Oasis of Grace.  Burial will follow in Pioneer Cemetery under the direction of Morrison Funeral Home.

Rev. Autry was born December 27, 1924 in Calvert, Texas to the late Dave and Bulah Thomas Autry.  He finished High School in Calvert May 19, 1944 and moved to San Angelo in 1951 and married Vermel Chambers April 14, 1951.  He worked for the Goodfellow Air Force Base and moved to Graham in 1971 to Pastor The Mt. Zion Baptist Church.  He worked for Morrison Clothing Store as a janitor and later went to work at Graham Magnetics until retirement in 1990.   Rev. Autry pastored churches in Brady, Eldorado, Graham and most recently Rising Star Baptist in Olney and Grace Chapel in Graham.  He served in the Quartermaster Army Service and also served as the corresponding Secretary of the Progressive West Texas Baptist District Association Sunday School and B.T.U. Congress of Auxiliaries for 13 years.  He was a member of the Mt. Zion Missionary Baptist Church in Graham and AFGE Masonic Lodge #300 in San Angelo.

He was preceded in death by brothers, C.F. Autry and M.J. Autry, grandson B. Merritt and great grandson, Isiah Smith.

Visitation will be held Saturday 8 to 11 a.m. at Oasis of Grace.

To send flowers to the family in memory of Rev. Dave Autry, Jr., please visit our flower store.
Send a Sympathy Card