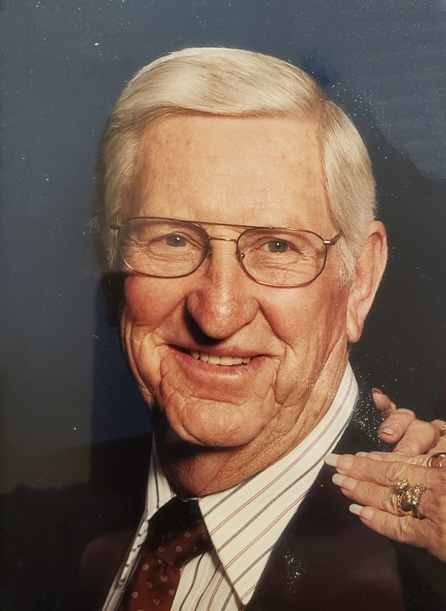 Frank is survived by his wife and the love of his life for the past 68 years, Faye Morgan, of Graham.  He is also survived by two sons, Ron Morgan and his wife, Mary Ann, of Arlington, and Gaylon Morgan and his wife Trena, of Comfort, Texas, 4 grandchildren, Tasha White and her husband Nathan, of San Diego, California, Tessa Hodges and her husband Chance, of Grand Prairie, Texas, Matt Morgan of Irving, Texas, and Christy Woodard and her husband Chance, of Bedford, Texas, and 3 great-grandchildren, Cadence Hodges, Nasher White, and Morgan Woodard, in addition to several nieces and nephews as well.

Frank was preceded in death by his parents, Everett and Maude Morgan, and by his 4 siblings, Estelle Morgan, Ora Dell Jennings, Betty Lee McWhorter, and Bill Morgan.

He was also a proud veteran, serving in the Army and the Merchant Marines during World War II.

Frank and Faye spent most of their adult lives in Odessa, Texas.  They started a church there, where Frank later served as an elder for many years.  Frank worked in the oil field supply business in Odessa, selling oil field equipment for Engine Life Company and later owning and operating Permian Filter and Supply Company for many years with his youngest son, Gaylon.

Frank and Faye retired in 1994, and shortly after that moved to Graham.  After retiring, Frank and Faye enjoyed many years of travelling across the country in their motor home, and even working for an RV travel company in their retirement as tour guides for several years as well.

Frank loved football, any game, anytime, anywhere.  He loved the Dallas Cowboys, Texas Longhorns, and any game he could find on TV.  Mostly though, he loved high school football, and especially the Odessa Permian Panthers.  He followed Permian football fanatically for decades, and then later in life he adopted the Graham Steers until he was no longer able to go the games.

Frank also loved singing.  He was blessed with a beautiful bass voice, and loved singing in quartets, and even singing for nursing home residents (many of whom he was older than at the time), until 3-4 years ago when he was no longer able.  He was a regular song leader at church for decades, and a very good one, and is being buried with his favorite song book.  And today, he is singing anew in heaven.

Frank loved his family.  He loved football.  And he loved singing.  But mostly, he loved the Lord and the work of the church.

His life exemplified the words of II Timothy 4: 7-8, "I have fought the good fight, I have finished the race, I have kept the faith.  Now there is in store for me the crown of righteousness, which the Lord, the righteous judge, will award me on that day -- and not to me only, but to all those who long for his appearing".

To send flowers to the family in memory of Robert Franklin "Frank" Morgan, please visit our flower store.
Send a Sympathy Card