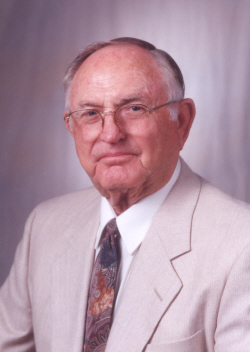 Roy Thomas Pitcock, Sr., 87, passed away Friday, March 17, 2017 at his residence in Graham. Memorial services will be held Monday, March 20, 2017 at 2:00 p.m. at the First United Methodist Church under the direction of Morrison Funeral Home.

Roy was born March 20, 1929 in Sylvester, Texas to Louis and Medora Shepherd Pitcock, while Louis was drilling a well there. They lived on the farm in Ranger, moved to Eastland, and then moved to Graham. He graduated from Graham High School and received a football scholarship to play at T. C. U. from 1949 to 1952. He married Jacqueline Garrison on October 16, 1955 in Corsicana, Texas.

Roy was active in business, professional, and community activities. He has held directorships for the West Central Texas Oil & Gas Association, the North Texas Oil & Gas Association, the Independent Petroleum Association of America, Texas Alliance of Energy Producers, and the North Texas Geological Society. He served as President of the West Central Texas Oil & Gas Association. He was appointed by Governor Ann Richards to the Interstate Oil & Gas Compact Commission and reappointed by Governor George Bush and Governor Rick Perry. He received the prestigious Wildcatter Award from the West Central Texas Oil & Gas Association in 1996 and the Distinguished Service Award from the Texas Alliance of Energy Producers in 2007. He has served as President of the Graham Lions Club, and has served on the Boards of Directors of the Graham Country Club, Graham Chamber of Commerce, the Graham Industrial Association, the Graham Independent School District Board of Trustees, the Young County Appraisal Tax Board, the Graham Wholesale Floral Company, and Media Recovery, Inc. He served two terms as City Alderman and was Chairman of the Board of Directors of Graham Savings and Loan, and served as Chairman of the Young County Sheltered Workshop. He was a director for the Fort Worth Southwestern Exposition Livestock Show and Rodeo and the Dave Bloxom Foundation. He was active in the Graham First United Methodist Church, the T. C. U. Alumni Association, and the T. C. U. Letterman’s Association, and in 1997 he was honored when he was elected to the T. C. U. Hall of Fame: and a second honor by having longtime friend & teammate Max Eubank induct him. He was a lifelong fan of TCU sports, especially football even during the bad years, and he stayed in touch with his TCU buddies including Dick Lowe and Milton Farmer. When asked to help get someone enrolled at TCU, he tried his best to do so.

Roy always enjoyed visiting with people. He would talk for hours, he was always the first arrive and the last to leave. He liked to pull pranks like shooting bottle rockets under a dorm door to wake up a friend or throwing blackcats under golfers’ feet while teeing off. He got a big kick out of turning a pig loose in Aunt Frances and Uncle John Hammond’s house.

A crude oil buyer was once asked if he had trouble doing business with Roy and he said “No, once Roy trained me to do it his way, things were great”. Roy always loved making a deal, often on just a handshake. When buying something, he expected a discount. When people started calling him a Senior Citizen, it bothered him until he found that often he could get the senior citizen discount. Then he was OK with it and even asked for the discount.

He was preceded in death by brothers, Louis Pitcock, Jr. and J. Duff Pitcock and a step-sister, Elizabeth Ann Hill.

A special thanks to Dr. Pete Brown, Beyond Faith Hospice, and Clear Path Home Care.

Memorials may be made to First United Methodist church 3rd Generation or a charity of your choice.

To send flowers to the family in memory of Roy Thomas Pitcock, Sr., please visit our flower store.
Send a Sympathy Card