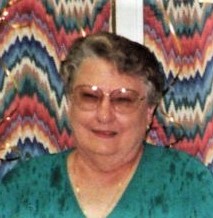 Ruba McCallister Weldon passed away Monday, November 11, 2019 in Denton, Texas at the age of 89.  A graveside service will be held at Pioneer Cemetery, Graham, Saturday, November 16, 2019 at 2pm.

A devoted wife, mother, grandmother, and great-grandmother, Ruba held family at the center of her life.  Her work life included the Oak Street Grill which she and Joe operated for a short while. She also worked as a bookkeeper and manager for several businesses. In her free time, she enjoyed flower gardening, crochet, sewing, cooking, and her beloved Boston Terriers.

Ruba is survived by her daughter, Judy Thurmond; son-in-law, Clay; grandson, Lee; and great-granddaughter, Naiyah, all of Denton; several nieces and nephews; and an extended family brothers- and sister- in-laws.

To send flowers to the family in memory of Ruba McCallister Weldon, please visit our flower store.
Send a Sympathy Card