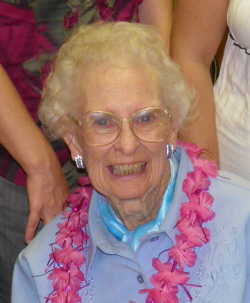 Ruth was born September 9, 1922 in Mason, Texas to the late Dean and Nancy (Kiser) Poynor. She married Olan Maurice “Reese” Franklin, November 28, 1942, in Valparaiso, Indiana. He preceded her in death on June 2, 1987. She worked in the Paramount Hotel during the war. After that she went on to work for the Ranger Social Science, Ranger Times newspaper, and then Brown’s (Swaney’s) Pharmacy. She retired from Brown’s Pharmacy in 1987. She moved to Graham to be with her daughter in 2013.

Ruth was a member of the Eastside church of Christ in Ranger until moving to Graham in 2013 where she became a member of the Hillside church of Christ of Graham. Her greatest love was her ministry to her Lord. She never missed a day of reading and studying her Bible or praying for her loved ones. She was always ready to jump in a car and head out to a gospel meeting whenever she could. She delighted in going to church services and singing praises to the Lord.

Ruth also loved working in her yard and being outside where she would walk up to three miles a day and wave at all her friends until her health failed her. Her friends, family, and neighbors were everything to her. Out of 94 years, she never missed any Poynor Family Reunions. She loved to cook, can, and bake things to take to others. She was known for her mother’s Angel food cake and hot rolls. Her greatest joy was when she saw her children and grandchildren walk through the door for a visit, but more important than that were her great grandchildren. She always had a meal ready to eat with hot rolls, black eyed peas, squash, okra, cake or cobbler or whatever else she could dream up when she knew someone was coming. In her later years, she loved feeding the birds from a window upstairs where she lived.

To send flowers to the family in memory of Ruth Poynor Franklin, please visit our flower store.
Send a Sympathy Card