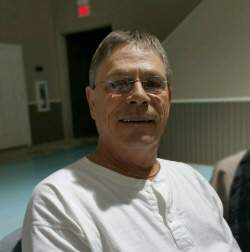 Stephen was born April 5, 1954 in Graham to George Kenneth and Phyllis Jo (Jones) Lane. He graduated from Angleton High School and worked for Scheriger Electric.

He was preceded in death by his parents George and Phyllis Jo Lane.

Memorials may be made to the Institution for the blind.

To send flowers to the family in memory of Stephen Charles Lane, please visit our flower store.