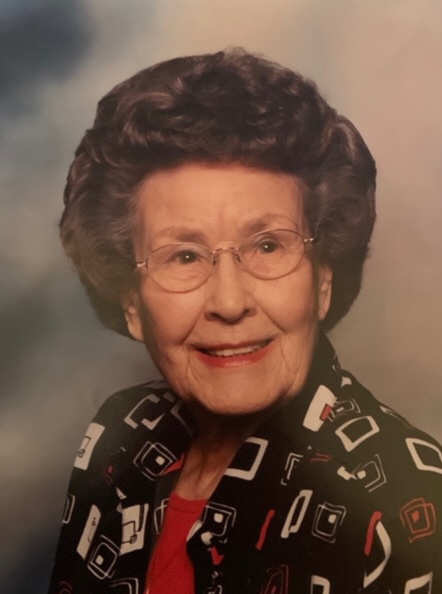 Velda Helen Bradshaw Clark passed away Monday, June 29, 2020 in Graham, Texas. She was 95 years old. Funeral will be 11:00 a.m. Thursday, July 2, 2020 at Oak Street Baptist Church. Burial will follow in Medlan Chapel Cemetery in Young County. Arrangements are under the direction of Morrison Funeral Home.

Velda Helen was born in Graham, Texas, on March 2, 1925 to Clay Virgil and Inez Cherryhomes Bradshaw. She was raised by her aunt and uncle, Gladys and George Jarrell. Velda had two brothers, Virgil Lee and Armon Bradshaw. She was baptized into the Tonk Valley Methodist Church in 1941.

Velda met John S. Clark in Graham, Texas, where she graduated from high school in 1942. After high school, Velda moved to California where she secured a job at a bank and lived with her aunt Vonnie and Uncle Reno. That was at about the same time that World War II broke out and John went into the service. After the war ended in 1946, John and Velda married in Las Vegas, Nevada, and lived in California. Before the birth of their first son, Troy Keith Clark, they returned to Texas. A few years later they welcomed their son Johnny Clark into the world. Eventually they had the pleasure of having their baby girl, Rhonda Clark. Velda was immensely proud of each of her children and their families.

Velda Helen was an amazing woman. She treasured family above all else and served them her whole life. She married into a large family of Clarks and loved them all very much. She was never happier than when the entire family landed at her house for the kick-off of hunting season or a Christmas celebration. She filled the living room with more Christmas presents than could be counted and filled our bellies with the best home cooking that you can imagine! She taught us all how to fish, and sewed us amazing treasures from hunting vests and Sunday dresses to quilts. She loved gardening and beautiful flowers of all kinds. In her later years, she relished the opportunity to play dominos at the Senior Citizen’s Center.

She is survived by her son Keith Clark and his wife Vicki Clark, of Brownwood; her son Johnny Clark and his wife Madilon Clark, of Graham; and her daughter Rhonda Pipkin and her husband Mark Pipkin of Eastland; as well as six adoring grandchildren, Dr. Kylah Clark Goff, Dr. Cullen Clark, Jason Clark, Josh Clark, Ryan Pipkin, and Rhett Pipkin and eleven precious great grandchildren.

Visitation will be Wednesday from 5:00 to 7:00 p.m. at Morrison Funeral Home.

To send flowers to the family in memory of Velda Helen Bradshaw Clark, please visit our flower store.
Send a Sympathy Card