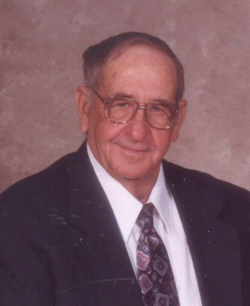 Walter Gene was born December 22, 1931 in Young County to the late Joe William and Nellie Lee (Sanders) Shepard. He married Erma Ruth Sams December 14, 1951 in Loving and she preceded him in death October 24, 2014. Walter Gene was a Farmer and Rancher for Shepard Farms and a veteran of the United States Army where he was a sniper in the Korean Conflict. He was a member of Loving Baptist Church, Young County Farm Bureau, Loving Fire Department, and Veterans of Foreign Wars. He served on the FHA Committee and FSA County Committee for many years. Walter Gene loved farming and ranching and he also owned and operated an oil lease for over twenty years.

He was preceded in death by a brother, Bobbie Joe Shepard in 2014.

Memorials may be made to Loving Cemetery Association or Loving Volunteer Fire Department.

To send flowers to the family in memory of Walter Gene Shepard, please visit our flower store.
Send a Sympathy Card