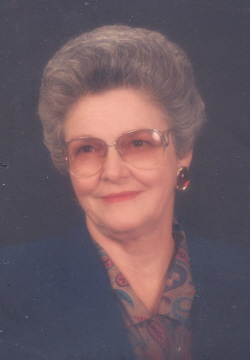 Wanda Gay Young Corbett, 82, of Graham, passed away Thursday, September 8, 2016 at her son and daughter-in-law's home in Lawton, Oklahoma. Funeral services will be held Sunday, September 11, 2016 at 2:00 p.m. in Morrison Funeral Home Chapel. Burial will follow in Pioneer Cemetery under the direction of Morrison Funeral Home. Visitation will be held Saturday from 5 to 7 p.m. at the funeral home.

Wanda was born December 13, 1933 in Eliasville to W.R. Young "Man" and Gay Virginia Elledge. She was the fourth of five girls born and is survived by two Francis Ranch of Albuquerque, NM and Roberta Dye of Ranger. Wanda graduated from Breckenridge where she was elected "Buckaroo Queen" 1951. She married Edmond Corbett "Shuey" of Ivan and they raised their 3 children Billy, Mike, and Treva. Wanda's family would later move to Breckenridge for work. She was a secretary/accountant for First National Bank. Wanda and family later moved to Graham for work and there she worked at Graham Magnetics for several years. She later took a job in Graham Regional Hospital until finding work at Pitcock Ready Mix where she stayed until her health declined. She loved the Pitcock family as if her own. Wanda was a fun, good hearted, loving woman who could light up any room and enjoyed helping others. Wanda's hobbies included: Quilting, sewing, gardening, canning, cooking where she was proficient in all.

She is survived by one son, Mike Corbett and wife, Jolene of Lawton, Oklahoma; son-in-law, Bill Schroeder of Fort Worth; two sisters, several grandchildren, great grandchildren and nieces and nephews.

She was preceded in death by her parents, husband, a son and daughter, 2 sisters, Dorothy Wright Spivey and Mattie Wright and a special sister-in-law, Jo Ann Dollar.

Memorial contributions can be made to any favorite charity.

To send flowers to the family in memory of Wanda Corbett, please visit our flower store.
Send a Sympathy Card